RAM, right off the bat.

Whisked from their gracious welcome at St. Joseph’s Home for boys, before our team could catch their breath, we bounced them down the mangled streets of Port au Prince, Haiti in the back of our pickup trucks to Hotel Oloffson to submerge themselves in ‘kompa” music by RAM, named after the lead singer, Richard Morse. RAM

The white mansion was built as a private home in the late 1800’s. Perched a bit uncomfortably on a steep hillside, the hotel has a storied past. It was home to two of Haiti’s presidents (the last one torn to pieces), but now plays host to diplomats, foreign aid workers, paramilitary attachés, former ton ton macoutes, artists, businessmen, and, for a few hours, the Children’s Hope Solidarity Team, 2014. 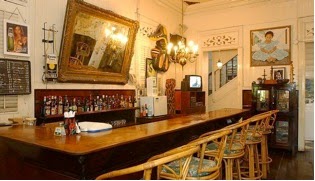 Oloffson’s packed and steaming dance floor lies at the core of an awkward yet intoxicating mix of ancient Taino artifacts, displays of rich cultural and Vodou heritage all tossed about with remnants of celebrities, dictators and torturous foreign domination. Unlike the Haitian constitution, the hotel survived the U.S. military occupation (1915 to 1934), by housing a military hospital. This seductive concoction set the heartbeat pace for our solidarity team. The music, grown from the roots of struggle and resistance, echoed in our ears through the long, stiflingly hot days of rapid-fire service.

Haiti is not just about abject poverty, though there is that. We come to serve, but also to listen and learn - of culture, music and tradition grown out of strength and survival.

Day two? The street market – to buy a month’s supply of food for MABE orphanage.

Peace, all ways and always,
Leisa

Professor Leisa Faulkner, University of the Pacific; Folsom Lake College; Founder, Children’s Hope
Posted by Leisa at 7:55 AM No comments:


I'm afraid I never learned to care much about my shoes, though my mother tried her best. I was most fond of rubber boots that could carry me out into the frog pond, if I had to wear something on my feet at all. Going barefoot for fun was the best part of summer.

‪Children in Cite Soleil are not so privileged. As I pack for our July trip, I am touched by the generosity of so many. In Haiti, children must have black leather shoes to be able to go to school. Impoverished parents simply cannot afford to buy the shoes their children need. Hundreds of pairs of leather shoes were donated this trip, making many children finally able to attend school.

Also donated were over 100 bottles of children's vitamins, and enough other medical supplies to fill 29 duffel bags!

Our intrepid team of mostly college students will paint and lug  their way through the most impoverished parts of Haiti, learning with each step how to walk in another person's shoes.

Please remember that you, too, can always be a part of our teams to Haiti. If not in person, you can join us in spirit. Please consider donating today (you can send a check to the address below). We will be meeting with two groups of women at two different tent cities (yes, they are still forced to live in tents even four years after the quake!), to meet and learn from them, and offer some support. We also hope to not only paint a free clinic and an orphanage (and buy paint), but we hope to have funds to leave a month's worth of food, propane and water. All these and other services need your support.

Thanks again for all you do...
Peace, all ways and always,
Leisa