Published on The Nation (http://www.thenation.com)
Despite a massive UN mobilization, Haitians stayed away from controversial presidential elections in large numbers on March 20, raising serious questions about the legitimacy of the government poised to take power. 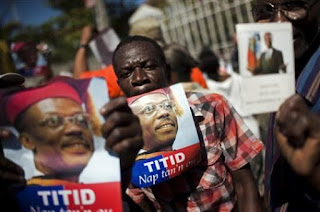 “The majority of the Haitian people did not vote in this election because the majority of people stand behind Lavalas,” said Wilnor Moise, a 29-year-old former bus conductor from Cité Soleil, referring to Fanmi Lavalas (FL), the democratic movement of former Haitian president Jean-Bertrand Aristide, which was barred from participating in the elections.

Haiti’s disputed parliamentary and presidential poll, culminating in the final round of voting this past Sunday, is key to the future of billions of dollars in pledged earthquake aid and to that of the 14,000-strong UN force that has occupied Haiti since the 2004 coup d’etat that overthrew Aristide and his party.

The banning of progressive parties and the FL from this year’s polls, allegedly because of procedural and technical issues, opened the electoral landscape to two neo-Duvalierist presidential candidates: Mirlande Manigat, 70, the wife (and some say surrogate) of a former right-wing president, and Michel “Sweet Micky” Martelly, 50, a popular konpa musician.

Martelly appeared to emerge as the victor, although preliminary results won’t be announced until March 31 and final ones on April 16.


Both candidates supported the 1991 and the 2004 coups against Aristide and both call for reinstating the repressive US-created Haitian army, which Aristide disbanded in 1995.

Patrick Elie, a former adviser to both outgoing President Rene Preval and President Aristide, argued that the United States has played an influential, behind-the-scenes role in the election, helping to put the extreme right in power in order to perpetuate the occupation of Haiti and keep its neoliberal policies in place.

“For twenty-five years, the US and the international community have sought to remove the people and the population from the political scene, and the plan has succeeded for the time being,” said Elie, referring to what British academic Peter Hallward called one of the most prolonged and intense periods of counterrevolution anywhere in the world.

“But the victor of these elections will have very little popular legitimacy,” Elie said, arguing that the electoral process has been a farce. “And because of that the victor will be the puppet of the international community and will have no card to play and no real popular support.”

In Cité Soleil, a vast and extremely poor neighborhood of Port-au-Prince, heavily armed UN soldiers patrol the streets. Graffiti proclaims “UN = misery” and “NGOs = misery,” references to the dominant role the international UN system plays in Haiti. (The UN military mission is the third largest in the world after Darfur and Congo.)

“This is an election of social exclusion; this is a selection,” said Wilson St. Val, 35, sitting in the shadow of a Brazilian-manned armored personnel carrier outside a Cité Soleil polling booth.

A former Presidential Service guard under Aristide, St. Val—like hundreds of Lavalas supporters—was beaten and imprisoned without charge after the 2004 coup. He walked free after five years in jail when the earthquake damaged Haiti’s notorious National Penitentiary.

“Our roots are numerous under the ground, truly numerous. We will not allow those people to exclude us from society at all. They call us bandits, they call us gangs, they call us kidnappers. But we won’t give up,” he said.

Despite the high stakes for the international community, Sunday’s balloting suffered from widespread administrative flaws and massive abstention by Haiti’s 4.7 million voters. And UN forces shot and killed at least one person on election day.

A review of balloting at four large polling stations in three Port-au-Prince districts revealed a voter participation rate of less than 18 percent among a sample of more than 12,600 registered voters.

UN officials put the turnout slightly higher. The UN’s Haiti chief, Guatemalan Edmond Mulet, claimed that more people voted than in the first round of presidential polling in November, when the turnout rate was 23 percent.

Even if that is true, it would represent the lowest electoral participation rate in the hemisphere going back to 1947, according to the Washington-based Center for Economic and Policy Research.

And it is far from a popular mandate for Martelly, who has used his entertainment roots to define himself as a political outsider. In robocalls, he promised change and all Haitians free education.

“He’s a musician and not a politician,” noted Ulysse Louisler, a 23-year-old resident of one of Port-au-Prince’s 1,000 earthquake camps, saying he would vote for Martelly. “With him, we have no experience. That’s why we want to test him.”

Less well known than Martelly’s music has been a history of crack abuse, threats of violence and close ties to Haitian military and political coup leaders with a string of human rights violations.

And Martelly has been an open and aggressive antagonist of Haiti’s popular and democratic movement.

In a recent YouTube video, the candidate threatens a patron in a bar where he has performed. “All those shits were Aristide’s faggots,” he says. “I would kill Aristide to stick a dick up your ass.”

The Spanish firm Ostos & Sola, which ran Mexico President Felipe Calderón’s controversial elections, has handled Martelly’s campaign. Under its tutelage, Tet Kale—or bald head, as he is known—has dropped much but not all of the thuggery and trash talk.

Patrick Elie warned that the new government, given its lack of popular legitimacy, may resort to repression to maintain control, with crackdowns on freedom of speech and assembly likely.

“There will be a clash between what the international community and neo-Duvalierists want and what the population still wants,” said Elie.

“And it might start earlier rather than later because the extreme right has no popular base and because these candidates are totally anti-popular.”