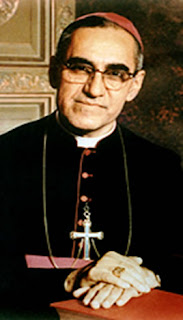 In El Salvador, on the last leg of his Latin American tour, President Barack Obama paid a highly symbolic visit to the tomb of Archbishop Oscar Romero, shot through the heart as he raised the Eucharist chalice during a mass, in March 1980. His assassination was ordered by Salvadoran military officer Roberto D’Aubuisson [1], a School of the America’s graduate.

As El Faro [2]—an important online source of independent Central American news—put it, Obama’s homage to Romero is a “truly extraordinary” gesture, since D’Aubuisson not only ran private-sector financed death squads but was a founder of ARENA, an ultraconservative political party that until 2009 had governed the country for two decades and enjoyed excellent relations with Washington.

Today, El Salvador is led by President Mauricio Funes, head of a center-left coalition government that includes the FMLN, the insurgent group turned political party Ronald Reagan wasted billions of dollars and over 70,000 lives trying to defeat in the 1980s. By lighting a candle for Romero, Obama, it might be said, was tacitly doing in El Salvador what he wouldn’t—or couldn’t—do in Chile: apologize for US actions that resulted in horrific human tragedy.

Obama in San Salvador focused on trade and immigration and celebrated Central America’s transition away from the civil wars of the 1980s and early 1990s. But hope, in reality, is in short supply; it would be difficult to exaggerate the crisis that today engulfs Central America, one that might very well turn out to be as bad as the 1980s.

Squeezed by Plan Colombia to the south and Mexico’s disastrous War on Drugs to the north, Central American violence has skyrocketed. Whole regions in Honduras and Guatemala are either overrun by narcos, or militarized by security forces, themselves deeply involved in criminal activity, including drugs, illegal logging, car theft and kidnapping. The explosion of biofuels production and the intensification of mining (particularly gold mining) has created an ecological disaster and generated widespread social dislocation. Protesting peasants, especially in Honduras and Guatemala, have been checked by a revived planter-death squad alliance, though now “death squads” generally go under the euphemism “private security.” An increasing number activists are turning up dead. In February, the bullet-ridden bodies of four Q’eqchi’ Mayan community leaders—Catalina Muca Maas, Alberto Coc Cal, Amilcar Choc and Sebastian Xuc Coc [3]—were found in a river.


Just last week, as the Canadian human rights group Rights Action reported [4], over the course of three days—March 15–17—hundreds of police officers, soldiers and private security forces entered fourteen Mayan communities in the municipality of Panzós shooting live ammo and firing tear gas in an effort to displace peasants to make way for African palm and sugar plantations. Peasants futilely begged soldiers to allow them to harvest some of their crops. At least one person was killed, many wounded, others arrested, and thousands are now living in makeshift shelters on the side of the road. The plantations are capitalized by the Central American Bank for Economic Integration, as part of the larger multilateral lending that supports the production of biofuels [5], to be sold in the United States. This social catastrophe is just one of the more recent expressions of the counter-insurgent neoliberal “security corridor,” running from Colombia through Central America to Mexico, I’ve written about here [6].

In his memoir, Obama says [7] he came to political awareness in the 1980s, opposing what he called Ronald Reagan’s “minions.” If so, he no doubt had some exposure to the Committee in Solidarity with the People of El Salvador, or CISPES, perhaps the most prominent of the organizations that worked to fight Reagan’s Central American policies. CISPES still exists, and it is still doing great work.

Most recently, timed to coincide with Obama’s trip to El Salvador, CISPES has launched [8] a campaign opposing the Canadian-based gold mining corporation, Pacific Rim, which under the terms of the Central American Free Trade Agreement (CAFTA) is suing El Salvador for $77 million. That figure corresponds to the profits Pacific Rim expected to earn had the Salvadoran government not revoked its operating permit (in response to an impressive, cross-class protest movement made up of environmentalists, progressive religious folk and peasants concerned with the high level of heavy metal contamination of water and soil and rocketing infant morality rates that resulted from similar mining operations).

That’s right, under CAFTA’s Chapter 10, private companies can sue countries for projected future profits lost as a result of national laws or regulations. But you might ask how a Canadian corporation can sue under the terms of CAFTA, since Canada isn’t a party to the treaty. Simple: Pacific Rim purchased in 2007 a Reno, Nevada, shell company to act as front. Forget that bugaboo of the jingoist right, so-called “anchor babies.” What we have here are “anchor corporations,” foreign businesses that get a toehold in the United States to secure their right to plunder. The suit will be arbitrated by the International Center for the Settlement of Investment Disputes, a shadowy appendage of the World Bank (more than half of the suits launched by corporations in the ICSID are against Latin American countries, and to give a sense how CAFTA has locked Central America into the neoliberal “security corridor,” Brazil has never joined the ICSID, Bolivia and Ecuador have withdrawn from its jurisdiction, and Venezuelan has announced its intention to pull out. Nicaragua, too, has threatened to withdraw, but it is unclear it can do so under the terms of CAFTA). As CISPES puts it, “As a candidate Obama promised to remove the rights of corporations to sue governments from trade agreements—it’s time he takes action.”

We can only hope that Obama finds inspiration in Oscar Romero’s life: Romero, after all, started his public career as a cautious moderate who believed he could quietly work with El Salvador’s ruling class to coax needed reform. The reality of Salvadoran society forced his conversion into an outspoken, confrontational leader who directly attacked those who perpetuated what he called “structural sin:” “When the church hears the cry of the oppressed,” Romero wrote [9] before his murder, “it cannot but denounce the social structures that give rise to and perpetuate the misery from which the cry arises.” If Romero was alive today, he would recognize CAFTA’s Chapter 10, along with the broader, disastrous policies Washington is pursuing in the Mexico-Central America-Colombia security corridor, as prime examples of “structural sin.”