In Defense of Aristide 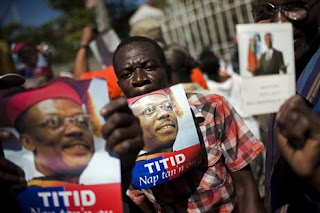 The Haitian government has issued a diplomatic passport to former president Jean-Bertrand Aristide. This is long overdue; Aristide has wanted to return ever since he was forced into exile in 2004.

There is no justification for him not to; he is a Haitian citizen, charged with no crime; and the Haitian constitution explicitly prohibits compulsory political exile. Aristide, The New York Times noted during his first exile (1991-1994), “won Haiti’s first and only democratic election overwhelmingly,” followed by a “seven-month tenure [that] was marked by fewer human-rights violations and fewer boat people than any comparable period in modern Haitian history.”

He wants to return home, as a private citizen, and assist in Haiti’s relief effort. He has repeatedly said since 2004 that he wishes to return home to work in the field of education. His two Ph.D.s – one in psychology and the other in African languages – and his history, including seven years teaching in South Africa and the establishment of a medical school and university at the Aristide Foundation are testament to his long involvement in education.

The ball is now in South Africa’s court. Even though Aristide has every right to return under Haitian and international law, documents recently revealed by Wikileaks show that the U.S. and the Brazilian governments have pressured the South African government to keep Aristide there. The United States imposes its will, as the most powerful nation on Earth, to keep in distant exile the deposed president of one of the weakest. Former dictator Jean-Claude Duvalier, meanwhile, walks free, gives press conferences and makes ceremonial visits around Haiti.

The return of Duvalier – accompanied by former death squad leader Louis Jodel Chamblain as his security chief – to Haiti last month revealed the stark double standard in U.S.-Haitian relations, one that harkens back to a shameful era, when the U.S. government propped up the brutal Duvalier regimes for decades. The danger is not only from his impunity, but from the threat of a re-legitimization of Duvalierism. Haiti now stands on the verge of a precipice; an extreme right-wing political turn – one that openly favors the rich and despises the poor – lies below.

The U.S. government is not a neutral spectator to this situation – this is clear from Obama-administration statements more opposed to the idea of Aristide’s return than to Duvalier’s ongoing presence. Even worse, the United States has been pressuring the Haitian authorities into arbitrarily allowing kompa singer Michel Martelly (who is known to have supported Duvalier in the past, and who got the support of just 4.5 percent of registered voters) to proceed to an elections run-off against former first lady Mirlande Manigat (who received 6.4 percent support from registered voters).

Considering what is known of the right-wing proclivities of each, this could be akin to Haiti’s equivalent of a presidential race between an unpopular Republican and an unpopular tea tarty candidate, with no Democrat allowed to compete. Contrary to last week’s media reports, however, the electoral authorities have not yet made a final decision on the elections runoff. It has now emerged that only half of the Electoral Council members actually signed onto the statement announcing Martelly’s advancement; a majority is required.

Ultimately, it is the right of the Haitian people – a right enshrined in Haiti’s constitution and the Universal Declaration of Human Rights – to decide their own political destiny. New first-round elections, including Fanmi Lavalas and all eligible parties this time, are the only democratic way forward. Aristide should also be allowed to return to Haiti. No foreign power – whether the U.S., South Africa, or others – has the right to impede his return. Contrary to what the State Department appears to suggest, by reversing a grave violation of constitutional order when Aristide was ousted, democracy will be strengthened when he comes back, not weakened.

Ira Kurzban was the former general counsel for the government of the Republic of Haiti from 1991 to 2004. He is currently representing former President Aristide.