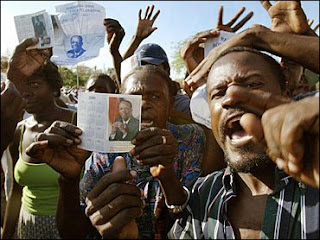 Supporters beat drums in the slums while workers spruced up his private villa as Haitians prepared yesterday for the possible return of Jean-Bertrand Aristide with feverish anticipation.

"Some people are cleaning the streets, others are getting the residence ready, and we are making preparations for a beautiful party," diehard follower Rene Civil told AFP.

"There is a real feeling of expectation among the people," Civil said, desperate to see his beloved "Titid" -or little Aristide -walk once again on Haitian soil.

Haiti has cleared the way for Aristide's return from exile in South Africa by issuing him with a new passport despite warnings from the United States that the move would only add to the quake-hit nation's political turmoil.

Aristide's lawyer said yesterday that the former president will return to Port-au-Prince before the second round of presidential elections on March 20.

"Yes, I believe it will happen before the election," lawyer Ira Kurzban told AFP.

The once firebrand man of the cloth, who rode his reputation as a champion of the poor to become Haiti's first democratically elected president, fled in 2004 aboard a U.S. plane, accused of massive corruption and rights abuses.

In his checkered political career, he served as president on three occasions, and was ousted from office twice, in a 1991 military coup and in a popular uprising in 2004.

As masonry workers repaired cracks in the walls of Aristide's once splendid villa, some residents dusted off their portraits of the diminutive, bespectacled former leader.

Door-to-door canvassing has been organized to recruit the biggest possible turnout whenever Aristide finally makes his return to Toussaint L'Ouverture airport.

Ancyto Felix, another tireless Aristide partisan, said there were plans to hold a massive rally in the Haitian capital on Friday.

Haiti, the poorest country in the region, is in dire circumstances following last year's earthquake, which killed more than 225,000 people.

Fervent Aristide supporters, who include many of the most desperate slum-dwellers, are convinced he is uniquely positioned lead the restoration of their battered country.

© Copyright (c) The Montreal Gazette
Posted by Paul B at 9:25 AM

This site looses a lot of credibility when it states Aristide was removed from office in 2004 after a popular uprising. He was kidnapped by the U.S. Military while U.S. supported thugs came back into the country in a wave of violence. Aristide has won his elections by 70% support of the people and would again if allowed by the U.S. to run.

Thanks for your comment. As a point of clarification, "this site" didn't state Aristide was removed after a popular uprising. Clarens Renois of the AFP/Montreal Gazette wrote the story. You are certainly correct that Aristide was overthrown by a U.S.-backed military coup. Unfortunately to stay as informed as possible on events in Haiti we must sometimes rely on the mainstream, corporate media. Within this context, we think this article is pretty good. But the perspective of the corporate media is inherently flawed.

This is a greaat blog