Aristide says he will return to Haiti 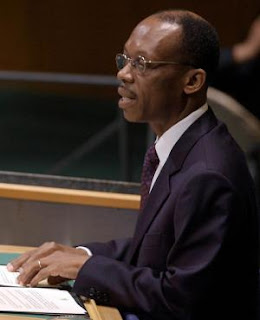 [Editor's Note: Genuinely great news for the people of Haiti. Seven years too late, but certainly better than never. And a note to the UPI reporter: Believing that Haitians should lead the reconstruction effort in Haiti is not "anti-American." To suggest as much is pure foolishness. - Paul B]

Writing in London's Guardian newspaper Saturday, Aristide said, "I will return to Haiti."

Aristide was removed from office in 2004 with the help of the United States government and he has been in exile since. His return could delay next month's presidential election, the report said.

Aristide said he wants to return to advance education in the country, which was struck by an earthquake in January 2010 that killed up to 300,000 people.

He has criticized the "profit-driven, exclusionary" method in which Haiti has rebuilt since the earthquake. He said "non-Haitians," led the rebuilding, hinting at his anti-American leadership methods.

If Aristide returns to Haiti he would join former dictator and adversary Claude "Baby Doc" Duvalier, who returned to Haiti last month after 25 years in exile.