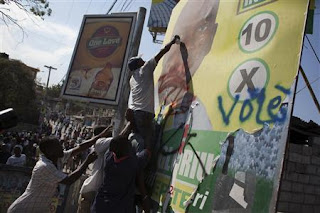 12:13am EST
By Joseph Guyler Delva and Allyn Gaestel

Gunshots echoed in some parts of the sprawling capital of Port-au-Prince following the announcement that former first lady Mirlande Manigat and government technocrat Jude Celestin would face a deciding second round in January following a turbulent November 28 vote.

The U.S. Embassy in Haiti issued a statement raising questions about the announced results, suggesting they might not be consistent with "the will of the Haitian people."

Protesting supporters of a third-placed candidate, popular musician Michel Martelly, lit burning barricades in the Petionville district, and in a crowded earthquake survivors' camp near the presidential palace, witnesses said.

Heavily armed police patrolled the streets of the capital, most of which was in darkness without electricity. They forced some of the protesters at gunpoint to dismantle the barricades.

Haiti's Provisional Electoral Council announced the preliminary official results nine days after the presidential and legislative elections were held amid protests, fraud charges and sporadic violence in the poor Caribbean country, which is also suffering a cholera epidemic.

Martelly finished less than 1 percentage point behind Celestin, a protege of Preval. Martelly has already accused Preval and Celestin and trying to rig the elections.

In a statement late on Tuesday, the U.S. Embassy said it was concerned the results were "inconsistent with" vote counts observed around the country by "numerous domestic and international observers." It did not explain this in detail.

"The United States, together with Haiti's international community partners, stands ready to support efforts to thoroughly review irregularities in support of electoral results that are consistent with the will of the Haitian people expressed in their votes," the statement said.

Media reports before the results announcement had cited unofficial returns showing Manigat facing Martelly in a run-off, rather than Celestin.

The run-off was announced between the top two vote winners after no candidate gained the more than the 50 percent required to win in the first round.

Manigat garnered 31.37 percent of the first round votes ahead of Celestin with 22.48 percent, according to the results read to reporters by Provisional Electoral Council spokesman Richard Dumel Thibault.

The electoral council announced the preliminary results on the basis of just over a million votes counted, out of a total of 4.7 million registered potential voters.

The second round has been provisionally set for January 16, but the date has to be confirmed by electoral authorities.

The international community has been hoping the elections, would produce a stable, legitimate new leadership to steer Haiti's recovery from a devastating January 12 earthquake that killed more than 250,000 people.

U.N. peacekeepers and international election observers have been grappling with repeated allegations of "massive fraud" by more than half of the 18 presidential candidates. There have also been recurrent street protests and fears that there may be worse violence still to come.

The U.N. peacekeeping mission in Haiti, which has more than 12,000 troops and police deployed in support of Haitian police, has appealed to candidates and their supporters to remain calm, respect the law and avoid violence.

Candidates can file appeals against the preliminary results within 72 hours of the results.

While acknowledging "the irregularities, the disorganization and the incidents of vandalism and violence which had marred Election Day," a joint Organization of American States/Caribbean Community election observer mission has cautiously endorsed the polls so far as generally valid.

The OAS/Caricom team declined to immediately comment on the announcement of the results.

The group of presidential candidates alleging fraud and calling for a cancellation of the vote sent several thousand noisy protesters onto the streets over the last week and pledged more unrest if the elections continued.

Celestin's well-funded campaign -- his green and yellow campaign posters dominated in the rubble-strewn streets of Port-au-Prince -- was nevertheless undermined by popular discontent over Preval's performance in responding to the earthquake and the cholera crises.

Preval's ruling Inite coalition has accused Martelly, Manigat and the group of candidates who are repudiating the polls of trying to orchestrate "an electoral coup d'etat."

Analysts said an extension of the elections into a second round would increase the chances for violence and unrest.

"So Haiti will be in that potentially explosive post-election limbo in all likelihood until January," said Markus Shultze-Kraft, who leads the governance team at the Institute of Development Studies at the University of Sussex.

The U.N. has warned unrest will hinder the fight against the cholera epidemic, which has already killed more than 2,000 people.

(Writing by Pascal Fletcher; Editing by Tom Brown and Bill Trott)
Posted by Paul B at 10:07 PM