Published on Friday, December 17, 2010 by CommonDreams.org
by Leisa Faulkner and Redginald Alvarez 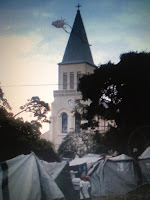 Earthquake rubble spews onto the street while people struggle to find clean water and sanitation to protect them from the cholera epidemic. Now, political frustrations over a recent failed election have fanned the flames of frustration that have been burning in Haiti since the quake. Claims of racketeering including ballot destruction, closures of voting places and even murder run through the local media. Now there are literal flames.

We had to skirt fire blockades of burning tires on motorcycles while taking supplies to a local orphanage. Most aid workers fled Haiti with the increased cholera threat, just when they are needed. The death toll now has risen to over 2,000. Nearly 100,000 have been treated, and many more treatment centers, doctors and aid workers are needed.


All supplies are hard to come by. After days of store closures, Sunday was the first day some stores opened. No bread, no meat, lines two hours long at the banks and gas stations. All public transportation ceased.

We took advantage of the break in demonstrations to get a first hand look into St. Pierre tent city, where we heard reports of excessive force by some UN troops. Two children and an elderly woman died after 5 hours of tear gas assault. Nepalese UN troops have been identified as the carriers of the cholera strain introduced to Haiti. Now in the shadow of St. Pierre church it was other Nepalese troops who tried to block a protest march near the election headquarters. At the corner of what used to be a flower market, library and church, rocks were thrown at troops, one was badly injured. The retaliation was relentless. 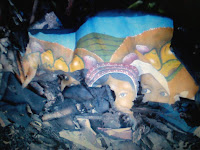 We interviewed a half dozen residents and a community organizer with “Concern”, Joseph Alexandre for their report. “They were toying with us, shooting the gas and plastic bullets at us, pausing then starting up again. This went on for hours and hours. They surrounded the camp and shot without regard into the center, where the children were. It was like the tear gas was a toy for them.”

A new young mother named Jania invited me into her tent to see baby Jeffy -- born a month early the day after Nigerian UN troops were able to convince the Nepalese troops to halt the assault. Their efforts came too late for some. Baby Jeffy wasn’t supposed to see 2010. He was supposed to be spared this cruel existence until after the dawn of the new year.

At least his life was spared. Many children and babies had blood running from their noses…other children did not make it at all.

Charcoal marks and burn holes are reminders of the assault. Tents have burn holes, bullets and gas canisters mark their random landings.

All of the paintings that used to line the rock wall of the church plaza lay scorched and mangled in a muddied mass next to the generator that ignited when a red hot tear gas canister set it off. One charred painting peaked out at me, just the eyes remaining. How much more burning can Haiti take?

Leisa Faulkner is a graduate student in Sociology at Sacramento State University and the Founder and Executive Director of Children's Hope. She has been bringing medical and school supplies to Haiti since 2004, and is a past contributor to Common Dreams. She's been to Haiti six times since the devastating earthquake of January 12, 2010.

Reginald Alvarez is a college intern who works also works as a translator and media assistant in Port au Prince.

I am really proud of you Ryan!