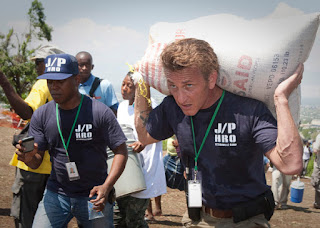 [Editor's Note: Sean Penn's analysis of Wyclef's Presidential aspirations is right on target. However, both Wyclef and Sean Penn are ignoring the most crucial fact regarding the upcoming Presidential and parliamentary elections in Haiti -- the largest and most popular party, Fanmi Lavalas, has been excluded by the Haitian electoral council (CEP). Unless this decision is reversed, then the results from the November 28 elections will be fundamentally undemocratic. As American citizens, we have a responsibility to put pressure on our government to support the democratic aspirations of the Haitian people, rather than continuing our more traditional role of undermining and violently repressing those aspirations -- Paul B]
Third Person Once Removed
The Huffington Post
Sean Penn, August 25, 2010

As Wyclef Jean announces his regrettable turn-about to contest Haiti's electoral rule of law (a law he has no previous record of dissension toward), his PR team is mobilizing. See Ms. Marian Salzman's recent blog on the Huffington Post (August 23, 2010). In it, Ms. Salzman, hired to frame perception of Mr. Jean, claims that I "lambasted" Mr. Jean's candidacy on CNN. Furthermore, she reduced the political dialogue that took place that day by calling the discussion a "celebrity feud". In fact, a sensationalized celebrity feud, is and was, as far from my mind as the alleged "lambasting." Though he and his camp came back with many disparaging comments in my direction, I felt that ignoring my initial impulse to react and respond allowed the attention to refocus on the real issues facing Haitians.

One can YouTube the segment of the August 8 Larry King Live in question. In the clip, Wolf Blitzer interviews Wyclef Jean upon his announcing his candidacy. The viewer will also see a response from someone (myself) who runs an NGO in Haiti, someone who has spent most of the last six months following the devastating earthquake, side by side in that country, with so many others, doing whatever we could to lend a hand. I have never met Wyclef Jean, and all I really know of him on any personal level has come through the fond comments of a few mutual friends. Hence, nothing I might say, was in ANY way personal, or intended to be lambasting to anyone. My comments were critical observations of a political candidate and a leader of an organization in Haiti.

Ms. Salzman also works to make the case that Wyclef Jean gave indispensable world attention to Haiti's incredible misfortune. I was there for those 6 months after the earthquake and so many of us on the ground wondered where he was when that kind of attention was so necessary and absent, and why he was NOT helping to keep this desperate situation in the news. None among us felt or expressed anger toward it, but rather a universal sadness for his silence, as he is America's most admired cultural link to Haiti. As the six-month Anniversary approached, it triggered the return of the world media, and of Wyclef Jean to Haiti. He'd referred to himself as "His Excellency Wyclef Jean" and "The most famous man in Haiti" on a self-generated flier in the lead up to his troubling announcement.

On the Larry King Show, I was an invited guest answering questions and expressing concerns about Wyclef Jean's place in Haiti's election. In particular, I voiced the responsibility of Americans and the American media to ask critical questions before jumping to support a candidate simply because they are familiar with him. I asked specifically for those Americans, or American companies, to dig deeper in assessing their own agendas, who might contribute any financial support to a candidate running for office in a country not our own. It's clear that Mr. Jean can have an important place in drawing attention to Haiti's needs. However, when New York press agents circle wagons of ignorance and sell as deep insight the advertisement of that which charms them about a client, the lives and needs of the Haitian people are sidelined. The very notion of a celebrity feud is one driven by a culture un-Haitian. And, in this reckless self-interest, Ms. Salzman's is an obscene input. This said, it is neither my place nor Ms. Salzman's to cast a vote. My support is with the Haitian people, and whomever they lawfully select as their next President. It is, it seems, folly for we Americans to assume "our Haitian" is their answer, simply because we enjoy the sense of identification we may feel, or are paid to espouse.

It should be said that laws that put limitation on the contribution by Haitians returning to their own country following an education abroad are worthy of review. And it would have been a valuable contribution had Wyclef Jean drawn attention to it in another moment, or in a less divisive ambition. However, the only attention that Haiti seems to be getting today is on a presidential campaign of personality that threatens to create a new swell of social unrest in a plagued country. I would caution Mr. Jean against research, or prospective policy, by sound bite.

When he chose to attempt to discredit me, claiming on the Gayle King Show on August 9 that my time in Haiti had been restricted to "one particular area", that area he was referring to is the 55,000 person IDP Camp that I and my organization were tasked to manage by the International Office of Migration. Indeed it is at that camp where we are based, but in fact, I and those I work with have operated 24-7 throughout the city of Port Au Prince and the country at large for all these months, distributing thousands of water filters, food, medicine, medical supplies and volunteers throughout the days and nights from the back of pick-up trucks and helicopters. We have directly been responsible for hiring and supervising rubble removal crews, heavy equipment, and coordinating multiple NGO actions from Cash for Work and food/water distribution.

On Gayle King's program Jean said the following: "I would like to tell Sean Penn I do not react on emotions when it comes to the Haitian people. I do not have to sacrifice my life and live inside of a tent to prove that I am for the Haitian people." No, he doesn't have to live in a tent. But it would be nice if he visited once and awhile. On the same program he said, that "had it not been for him," my organization would never have been able to enter Haiti due to historic security problems, (referring to his self-proclaimed one man peacemaking position) he must have missed the fact that, unlike him, I travel without the benefit of a security corps. I have traveled alone in the Iraqi war zone, and security had not ever been a deciding factor in any such humanitarian or journalistic action for me.

Lastly, I would like, again, to invite the reader to view CNN's Larry King segment in full (below). Watch carefully for Mr. Jean's responses to two questions. First, the one about his consecutive residential status where he states, "I have residency for over five years in Haiti." Then see his response regarding his fluency in either French or Creole. I'll let the reader decide if his answers are as forthcoming as his uninformed disparagement of one who was simply there to help.

So, yes, we still must ask questions. Yes I still support those Haitians who believe in him. But, I recommend that Mr. Jean and his advisers keep their future musings on more important topics than discrediting someone involved with a really good NGO. The real and devastating human issues in Haiti must be handled and led by a qualified president's deft hand. These elections are crucial, and I have no part in them. Neither should Mr. Jean.
Posted by Paul B at 3:34 PM