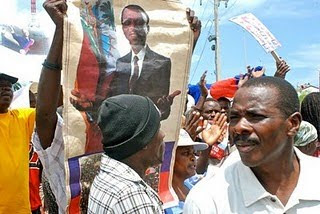 By Wadner Pierre
published by IPS, Photo by Wadner Pierre
PORT-AU-PRINCE, Jul 30, 2010 (IPS) - After weeks of delays, Haitian President René Préval confirmed this month that presidential and legislative elections will take place on Nov. 28. The U.N. and Western donor nations are pledging millions of dollars in support of the polls, but with at least 1.5 million people still homeless from the January earthquake, questions loom over how to ensure voter participation.

In the last round of senatorial elections before the earthquake, less than three percent of the electorate participated. Fanmi Lavalas, widely seen as the most popular political party in the country, was excluded from the election on technical grounds, along with some other parties. Now, the party has again been banned from participating in the November polls.

International donors have expressed disappointment at Haiti's failure to hold inclusive elections, but have continued to fund them.
In recent weeks U.S. Senator Richard Lugar, the ranking Republican member on the foreign relations committee, issued two reports recommending candidates from Fanmi Lavalas be allowed to participate. But his calls have been dismissed by Préval and the Provisional Electoral Council, the entity charged with organising elections.

On Wednesday, nearly one hundred Fanmi Lavalas supporters held a sit-in outside the U.S. Embassy in Port-au-Prince.

"We come in front of the Embassy to ask President [Barack] Obama to take action because we didn't support him for this," said a woman identifying herself as Madeleine. "President Préval excludes us from the elections. We voted for him, but this isn't what we wanted."

Fanmi Lavalas is the party of former President Jean-Bertrand Aristide, who was removed from office in a U.S.-backed coup d'etat in 2004. The de facto regime that took power after Aristide killed, disappeared, and imprisoned hundreds of Fanmi Lavalas supporters.

"We think they need to clean their hands by returning President Aristide to his home. And we are very clear, we ask simply for his return," said Dr. Marice Narcisse, a Fanmi Lavalas leader. "We have launched a non-stop peaceful mobilisation against the plan that aims to exclude the people."

Dozens of Haitian police prevented demonstrators from standing in front of the Embassy's front gate. But the protesters split into two groups, eventually moving from across the street to block the entrance.

Narcisse says media portrayals of her party as rife with internal divisions are false. From exile, Aristide designated Narcisse to represent his party with a signed and legal mandate before the Provisional Election Council (CEP). Shortly before the earthquake, Aristide spoke on Port-au- Prince's Radio Solidarité to confirm the mandate, reaffirming the willingness of his party to participate in the electoral process.

"The ambassador here is the representative of the U.S. government in Haiti," said Lionel Etienne, a former Fanmi Lavalas congressman. "We come here today to question the behaviour of the U.S. government. We're asking if they will continue to finance the exclusion of Lavalas by the CEP with Préval."

"Fanmi Lavalas, we believe in the democracy. We never have taken power in any way besides elections," he added.

The sit-in ended without incident shortly before noon. Protesters moved to downtown Port-au-Prince to hold a march.

Préval's administration has been roundly criticised from within and outside Haiti for excluding parties from elections. The CEP, whose members were appointed by Préval, is seen as corrupt and biased in many quarters.

Jean Enel Desir, the representative of the Catholic Church in the body, has ignored calls to resign after being accused of corruption.

Over 40 million dollars has been pledged by the U.N., the 15-member Caribbean Community (CARICOM), the United States, and other foreign bodies towards this year's elections.

On Thursday, the Organisation of American States and CARICOM said they would send 193 observers to monitor the polls, in which Haitians will choose a new president, 10 senators and 99 members of parliament. The European Union says it will also send its own observers.

However, many Haitians remain deeply pessimistic about the fairness and transparency of the process.

"President Préval does not care for how much people turn out to vote," Mario Joseph, a prominent human rights lawyer, told IPS. "He's organising elections for people but doing everything possible to deny Fanmi Lavalas, the largest political party, and other political parties from running in these coming elections."

In Gonaives, one of Haiti's major cities in the north, Jean Nord, a motorcycle taxi driver, told IPS, "We are waiting for the elections. But all parties fulfilling the condition to participate in the elections must be allowed to participate."
Posted by Paul B at 8:30 PM