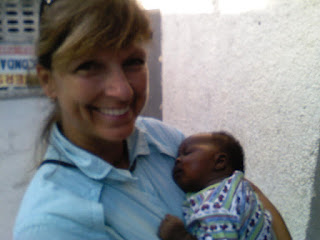 A woman I took into Wharf Soleil a few days ago told me at one point that she just couldn't handle it. Wharf Soleil is a rough neighborhood within the slum, Cite Soleil. I have always held my own there, but you do have to be aware and thoughtful. The folks there have suffered more than most, and are frustrated.

We had gone out of the wharf to flag down a water truck, and were going back in.

"Try not to", it’s as simple as that. “We can’t add to their burden. Think of something else”, I said. Think of the children’s kites. Anything.

The disease and dirt is their struggle, not their fault.

Sure there is incredible pain...more and more the deeper you look.

A few days earlier, a man offered us his five year old daughter, because he couldn’t feed her anymore.

A young boy told me about his brother who died from drinking too much salt water mixed with left over ash...I heard later that this is sometimes done to stave off hunger.

The immense struggles for mere life deep in the slums are overwhelming. I couldn't do nearly as well as those that live here every day. I am sure I wouldn't last a week. Though the desperation, anger and frustration are etched on even the children's faces, so are strength, integrity and compassion.

For example, that day I had stepped into some black oily mud by mistake down by the wharf, where mothers were pleading for water and food. Even there, someone managed to find a cup of water for my shoe, and washed me...me....those with less than nothing wanted to help me and my little pathetic need.

But these struggles are not all there is to know about Haiti . Believe it or not, there are beautiful beaches in Haiti...believe it or not, I went to a kindergarten graduation on Sunday where little Haitian girls performed ballet in perfect white tutus...believe it or not, I still hope that Haiti can one day return to that millenniums-old balance between nature and man it once had (something my own culture has never attained)…believe it or not one day Haiti may be justified, restored and finally left in peace. One has to believe.

Peace, all ways and always…leisa

Donations may be made at:
http://coalitionfordemocracyinhaiti.blogspot.com/
Posted by Paul B at 12:18 PM