If I was President... more than just a song? 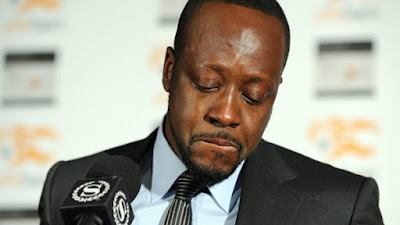 [Editor's Note: Have the Haitians found their Schwarzenegger? Interesting development in a country where former President Aristide's Lavalas party, which represents somewhere between 75-90% of the Haitian people, has been excluded from the November 28th presidential and parliamentary elections by President Preval's hand-picked Electoral Commission.]

Haitian-born musician Wyclef Jean is overcome with emotion while discussing his recent visit to earthquake-stricken Haiti and how is organization, Yele Haiti, is helping with relief efforts, Monday, Jan. 18, 2010, in New York. (AP / Diane Bondareff)
MONTREAL — A spokeswoman for Wyclef Jean isn't saying whether the hip hop star has plans to run for the Haitian presidency.

Adrienne Jacoby was responding to a report in an Ottawa-based newspaper that says the Haitian-born musician is poised to run for president.

French-language newspaper Le Droit reports that a source close to the Haitian government is "sure" the singer and producer will be a candidate.

Jacoby, who works for Jean's charitable Yele Haiti Foundation, says the performer would likely issue a statement if and when he announces his candidacy.

She says rumours have been circulating about the possibility of Jean making a run for the presidency of the Caribbean nation.

When asked by Fox Business this week if he would run for president, Jean responded "currently at this minute, no."
Posted by Paul B at 4:03 PM