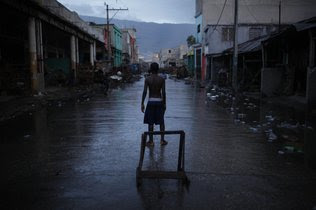 A youth plays street soccer in Port-au-Prince, Haiti. The headmaster of a nonprofit school said students often drop out to earn money for the family.

By Andrew MacCalla
Special to The Bee

Since the devastating earthquake that rocked Haiti on Jan. 12, I've spent nearly three months in the Caribbean island nation conducting assessments of health care providers in order to deliver needed medical supplies. My time in the capital of Port au Prince, in deeply impoverished communities and in outlying towns has provided a good introduction to the obstacles facing Haiti in its efforts to rebuild. However, the more time I spend there, the more Haiti feels like a study in opposites. It is a country that just cannot seem to get ahead, despite all the help it has received and the great character of its people.

In my work for Direct Relief International, California's largest privately funded international nonprofit, I have been locating and determining the needs of quality medical facilities in Haiti, the ones that are still standing anyway. They range from large-scale hospitals to facilities made up of a couple of tarps propped up in tent cities engulfing Port-au-Prince.

The goal of Direct Relief, which focuses on bringing critically needed medicines and supplies to health care providers worldwide, is to allow these facilities to maintain patient care for tens of thousands of people, and to enable patients and facilities to get a foundation for the long recovery effort ahead.

But as I leave Sacramento today and head back to Haiti for my fourth trip, solutions to rebuild the country remain elusive.


Haiti often has been bumper-stickered as "one of the poorest countries in the Western Hemisphere." However a two-hour plane ride is all that separates Haitians from the United States, the richest country in the world. Even so, each time I step off the plane after landing in Haiti, I'm jolted by the differences between my home in Sacramento and life in Port-au-Prince.

At home, there's water in the faucet, flushing toilets and lights that turn on. Streets are paved, traffic is bearable, and you can easily buy gasoline at the station. In Haiti, nothing comes easy and nothing is taken for granted. Water is carried from wells over great distances, baths are taken in streams, toilets are often holes in the ground, and electricity is a luxury for the wealthy. Streets are unpaved and turn into muddy rivers after heavy rain, traffic is so bad that you often don't move an inch for hours, and you're often confronted by men carrying shotguns in the line at the gas station who are filling their cans to sell for a profit down the road.

And if Haiti's proximity to the United States wasn't enough to help the country that lacks natural and material resources, the U.S. government has directed more than $1 billion to Haiti since 2005. Many other donor countries also have spent large sums to help. These facts make it hard to understand how Haiti can have 54 percent of its people living on less than $1 a day and 80 percent of its people living below the poverty line. It seemed to me that if Haiti couldn't capitalize on its proximity to the United States, then at least all the foreign aid it's received should be enough to stabilize the country.

But now that I've spent time in Haiti I've seen the opposing realities firsthand. I think often about a woman I met on the street who held up her two naked babies and asked that I take a picture of them to show people back home that she doesn't even have money to put clothes on her baby girls. We are working hard to help the people of Haiti, infusing the country with large sums of well-allocated resources, but there are huge gaps not being filled.

And despite the fact that the people of Haiti are doing all they can to find jobs, unemployment hovers between 70 and 80 percent. Anytime you walk the streets of Port-au-Prince or enter into the U.N. Logistics Base at Toussaint L'Ouverture Airport, you are likely to be approached multiple times by capable people looking to become your translator, laborer, driver or cook.

Pino Blanchard, a local businessman, runs a water filtration plant in Port-au-Prince. When he opened the plant Jan. 1, more than 10,000 people lined up outside for 500 available jobs.

As a result of high unemployment, the government of Haiti is left with a largely untaxable population, which makes providing social services and developing infrastructure nearly impossible. Therefore, Haiti has been inundated with nongovernmental organizations, known as NGOs, that try to provide many of these basic social services. Indeed, Haiti has been declared a "Republic of NGOs" because it has the second highest number of NGOs per capita in the world – between 3,000 and 10,000 before the earthquake hit.

And while many of these groups work in education, health care and development, illiteracy is estimated at 44 percent, 60 percent of Haitians don't have access to basic health care, and roughly half the population lacks access to clean drinking water.

On one trip, I visited an elementary school in Mirebalais, a town an hour north of Port-au-Prince that is funded and run by a nonprofit organization started by a Haitian professor. It was the first place I'd visited since the earthquake struck where I'd seen smiles on the faces of all the children.

But I noticed there were fewer and fewer students as I walked into each higher grade level. While there were roughly 150 kindergartners running around the playground, there were only about half a dozen sixth-graders sitting at their desks in a classroom upstairs. The headmaster told me students often have to drop out to help make money for the family or because they can't pay for their uniforms. Even a free education provided by a nonprofit cannot be utilized by everyone in Haiti.

Another often cited statement about Haiti is that it's "one of the most dangerous and violent places in the region." Perhaps statistically accurate, but my experience belies that statement. Not once in my three months there was I ever threatened or accosted, and most of my time was spent in impoverished communities and without any security arrangements.

I believe that our organization's effective response in Haiti – more than 400 tons and $42 million in specifically requested medicines and supplies – has been due primarily to the extraordinary kindness and generosity extended by dozens of Haitians who have assisted and guided us along the way. From the minute we landed in Haiti we made friends with people whose answer to every request was, "Whatever you need, we can do. No problem."

I'm beginning to think all the people we have met are not unusually generous; they are just Haitian. One man I didn't know literally gave me the shirt off his back after I told him I liked it. Before going to Haiti, I thought that was just an expression.

It's impossible to project what the future holds for Haiti. The optimists hope this earthquake will generate so much attention from the international community that the country will be rebuilt from scratch and be stronger than ever. The pessimists are discouraged by the possibility that the billions of dollars pledged won't materialize and that the money already donated – mainly to large, international organizations – will just be consumed without any more or better results than previously experienced.

Surprisingly, many Haitians I've asked about the future say things will improve only if the United States (more specifically, former President Bill Clinton) is put in charge.

Haiti has an astoundingly high set of barriers to overcome. But after seeing the resident talent, compassion, intense desire to work and other contrary-to-the-bumper-sticker characteristics, I feel hope.

I'm hopeful because it's hard to ignore the tens of thousands of people who have decided to invest in or travel to Haiti to assist in whatever way they can. I've met many people, from middle-school students to world-renowned surgeons, who left their families to volunteer their time, expertise and money. I've seen hundreds of NGOs working hard and selflessly in Haiti and, despite some failings, it's clear that they do make Haiti a better place to live.

But most of all, I've had a chance to meet and live with Haitians, who are no more a bumper sticker than those of us dismissed with the "California slacker" moniker. I have seen Haitian men, who are desperate to work and tired of waiting for somebody else, climb atop collapsed multi-story buildings and pull the rebar away from concrete piece by piece, using only a sledgehammer and an occasional wheelbarrow. Hospitals that were overrun with patients and families who had nowhere else to go, are now functioning almost at pre-earthquake levels. And children are going back to school, dressed in the cleanest uniforms I have ever seen, even though the rainy season has started and most are still sleeping outside under tarps and tents.

I've never met a person whose life aspiration is to be an aid recipient, least of all Haitian people who have incredible work ethic and great sense of pride. So I find myself with refreshed optimism. I am looking forward to going back today to see what has improved since my last trip, how far they've come and what other barriers have been broken.

Eventually, I may be able to stop going to Haiti to distribute medicine, and I can spend more time with my wife in Sacramento helping people in our neighborhood who could use a hand. But for now, I'm anxious to see my new friends in Haiti and proud to be helping them get their country to where it deserves to be.

Andrew MacCalla, of Sacramento, works for Direct Relief International, a non-profit based in Santa Barbara. MacCalla is on a 10-month assignment as Haiti programs operations specialist for direct relief.
© Copyright The Sacramento Bee. All rights reserved.
Posted by Paul B at 7:06 PM