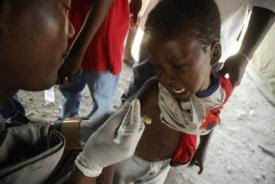 A Haitian doctor vaccinates a Haitian boy at a camp set up for people displaced from their homes in Jacmel on February 10. The World Health Organization on Wednesday urged medical aid agencies to stay in Haiti as long as possible while health care is rebuilt following last month's devastating earthquake.(AFP/Ariel Marinkovic)

PORT-AU-PRINCE - The scale of devastation in Haiti is far worse than in Asia after the 2004 tsunami, a study has said, estimating the cost of last month's earthquake at up to 14 billion dollars.

The report released yesterday from the Inter-American Development Bank (IDB) raised the possibility that the quake could be the most destructive disaster in modern history.

Its stark assessment comes with Port-au-Prince still lying in ruins more than one month on, while the bodies of more than 200,000 dead pile up in mass graves outside the capital.

The study's release coincided with what would normally be Haiti's annual carnival, an explosion of pulsing music and colorful parades. But this year, the events have been cancelled as no one is in the mood to party.

The preliminary IDB report estimated the damage at between eight and 14 billion dollars in what was already the poorest country in the Americas before the catastrophe.

Factoring in Haiti's population and economic output, the upper estimate would make it the most destructive natural disaster in modern history, the bank said.

"Indeed, in this respect the Haiti earthquake was vastly more destructive than the Indonesian tsunami of 2004 and the cyclone that hit Myanmar in 2008," an IDB statement said.

"It caused five times more deaths per million inhabitants than the second-ranking natural killer, the 1972 earthquake in Nicaragua."

Haiti officials say more than 217,000 people were killed in the quake, or about 2.4 percent of the country's population of nine million.

The 14-billion-dollar figure is the Washington-based bank's upper estimate for the cost of reconstructing homes, schools, streets and other infrastructure in Haiti following the January 12 quake.

The IDB said a more detailed accounting of the situation would come in the following months but that its preliminary study showed that the reconstruction cost was likely to be far higher than anticipated.

Meanwhile, Haiti's carnival celebrations, usually the culmination of weeks of parties, were replaced by mourning.

"Everybody's sad," said Nanotte Verly, a 48-year-old mother of nine who lost her home in the quake and sells jewelry and wooden plaques praising Jesus on a roadside. "All the buildings are still collapsed on the ground."

More than a million Haitians are still homeless following the earthquake, living in squalid camps in and around the capital.

The traditional center of carnival celebrations, the Champ de Mars park across from the collapsed National Palace, is now a sprawling homeless camp housing some 16,000 people in a maze of tents made of scrap wood and sheets.

Lemaire Sicard, 37, lives at the site and spoke of how the Champ de Mars would be filled with revelers and partying in years past.

"But now there's nothing," he said. "It's not possible. There are people from this area who were hurt -- deaths also."

While aid workers rush to distribute tarpaulins before the rainy season starts, the United Nations says only about 272,000 people have been provided with shelter materials so far.

On his second day in Haiti to give a boost to the relief effort, Canadian Prime Minister Stephen Harper visited Canadian troops in Leogane, a town largely wiped out by the quake where the soldiers are helping set up a hospital.

Harper had earlier said Canada would set up a semi-permanent, 11-million-dollar headquarters for the Haitian government, which currently operates out of a police building because the palace and many government ministries were destroyed in the quake.

In a positive sign for the quake-torn country, American Airlines said it would resume the first commercial flights to Haiti on Friday.