Cuba's Aid Ignored by the Media? 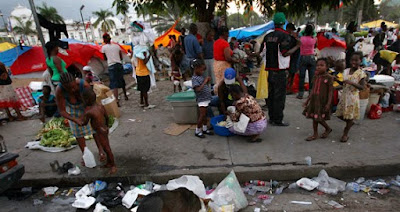 Cuba's aid ignored by the media?
By Tom Fawthrop in Havana

Among the many donor nations helping Haiti, Cuba and its medical teams have played a major role in treating earthquake victims.

Public health experts say the Cubans were the first to set up medical facilities among the debris and to revamp hospitals immediately after the earthquake struck.

However, their pivotal work in the health sector has received scant media coverage.

"It is striking that there has been virtually no mention in the media of the fact that Cuba had several hundred health personnel on the ground before any other country," said David Sanders, a professor of public health from Western Cape University in South Africa.

The Cuban team coordinator in Haiti, Dr Carlos Alberto Garcia, says the Cuban doctors, nurses and other health personnel have been working non-stop, day and night, with operating rooms open 18 hours a day.

During a visit to La Paz hospital in the Haitian capital Port-au-Prince, Dr Mirta Roses, the director of the Pan American Health Organisation (PAHO) which is in charge of medical coordination between the Cuban doctors, the International Committee of the Red Cross (ICRC) and a host of health sector NGOs, described the aid provided by Cuban doctors as "excellent and marvellous".

La Paz is one of five hospitals in Haiti that is largely staffed by health professionals from Havana.

Haiti and Cuba signed a medical cooperation agreement in 1998.

Before the earthquake struck, 344 Cuban health professionals were already present in Haiti, providing primary care and obstetrical services as well as operating to restore the sight of Haitians blinded by eye diseases.

More doctors were flown in shortly after the earthquake, as part of the rapid response Henry Reeve Medical Brigade of disaster specialists. The brigade has extensive experience in dealing with the aftermath of earthquakes, having responded to such disasters in China, Indonesia and Pakistan.

"In the case of Cuban doctors, they are rapid responders to disasters, because disaster management is an integral part of their training," explains Maria a Hamlin Zúniga, a public health specialist from Nicaragua.

"They are fully aware of the need to reduce risks by having people prepared to act in any disaster situation."

Cuban doctors have been organising medical facilities in three revamped and five field hospitals, five diagnostic centres, with a total of 22 different care posts aided by financial support from Venezuela. They are also operating nine rehabilitation centres staffed by nearly 70 Cuban physical therapists and rehab specialists, in addition to the Haitian medical personnel.

The Cuban team has been assisted by 100 specialists from Venezuela, Chile, Spain, Mexico, Colombia and Canada and 17 nuns.

Havana has also sent 400,000 tetanus vaccines for the wounded.

Eduardo Nuñez Valdes, a Cuban epidemiologist who is currently in Port-au-Prince, has stressed that the current unsanitary conditions could lead to an epidemic of parasitic and infectious diseases if not acted upon quickly.

However, in reporting on the international aid effort, Western media have generally not ranked Cuba high on the list of donor nations.

One major international news agency's list of donor nations credited Cuba with sending over 30 doctors to Haiti, whereas the real figure stands at more than 350, including 280 young Haitian doctors who graduated from Cuba. The final figure accounts for a combined total of 930 health professionals in all Cuban medical teams making it the largest medical contingent on the ground.

Another batch if 200 Cuban-trained doctors from 24 countries in Africa and Latin American, and a dozen American doctors who graduated from Havana are currently en route to Haiti and will provide reinforcement to existing Cuban medical teams.

By comparison the internationally-renowned Médecins Sans Frontières (MSF or Doctors without Borders) has approximately 269 health professionals working in Haiti. MSF is much better funded and has far more extensive medical supplies than the Cuban team.

But while representatives from MSF and the ICRC are frequently in front of television cameras discussing health priorities and medical needs, the Cuban medical teams are missing in the media coverage.

Richard Gott, the Guardian newspaper's former foreign editor and a Latin America specialist, explains: "Western media are programmed to be indifferent to aid that comes from unexpected places. In the Haitian case, the media have ignored not just the Cuban contribution, but also the efforts made by other Latin American countries."

Brazil is providing $70mn in funding for 10 urgent care units, 50 mobile units for emergency care, a laboratory and a hospital, among other health services.

Venezuela has cancelled all Haiti debt and has promised to supply oil free of charge until the country has recovered from the disaster.

Western NGOs employ media officers to ensure that the world knows what they are doing.

According to Gott, the Western media has grown accustomed to dealing with such NGOs, enabling a relationship of mutual assistance to develop.

Cuban medical teams, however, are outside this predominantly Western humanitarian-media loop and are therefore only likely to receive attention from Latin American media and Spanish language broadcasters and print media.

There have, however, been notable exceptions to this reporting syndrome. On January 19, a CNN reporter broke the silence on the Cuban role in Haiti with a report on Cuban doctors at La Paz hospital.

When the US requested that their military plans be allowed to fly through Cuban airspace for the purpose of evacuating Haitians to hospitals in Florida, Cuba immediately agreed despite almost 50 years of animosity between the two countries.

Cuban doctors received global praise for their humanitarian aid in Indonesia [Tom Fawthrop]
Josefina Vidal, the director of the Cuban foreign ministry's North America department, issued a statement declaring that: "Cuba is ready to cooperate with all the nations on the ground, including the US, to help the Haitian people and save more lives."

This deal cut the flight time of medical evacuation flights from the US naval base at Guantanamo Bay on Cuba's southern tip to Miami by 90 minutes.

According to Darby Holladay, the US state department's spokesperson, the US has also communicated its readiness to make medical relief supplies available to Cuban doctors in Haiti.

"Potential US-Cuban cooperation could go a long way toward meeting Haiti's needs," says Dr Julie Feinsilver, the author of Healing the Masses - a book about Cuban health diplomacy, who argues that maximum cooperation is urgently needed.

Although Cuba is a poor developing country, their wealth of human resources - doctors, engineers and disaster management experts - has enabled this small Caribbean nation to play a global role in health care and humanitarian aid alongside the far richer nations of the west.

Cuban medical teams played a key role in the wake of the Indian Ocean Tsunami and provided the largest contingent of doctors after the 2005 Pakistan earthquake. They also stayed the longest among international medical teams treating the victims of the 2006 Indonesian earthquake.

In the Pakistan relief operation the US and Europe dispatched medical teams. Each had a base camp with most doctors deployed for a month. The Cubans, however, deployed seven major base camps, operated 32 field hospitals and stayed for six months.

Bruno Rodriguez, who is now Cuba's foreign minister, headed the mission - living in the mountains of Pakistan for more than six months.

Just after the Indonesian earthquake a year later, I met with Indonesia's then regional health co-coordinator, Dr Ronny Rockito.

Cuba had sent 135 health workers and two field hospitals. Rockito said that while the medical teams from other countries departed after just one month, he asked the Cuban medical team to extend their stay.

"I appreciate the Cuban medical team. Their style is very friendly. Their medical standard is very high," he told me.

"The Cuban [field] hospitals are fully complete and it's free, with no financial support from our government."

"We felt very surprised about doctors coming from a poor country, a country so far away that we know little about.

"We can learn from the Cuban health system. They are very fast to handle injuries and fractures. They x-ray, then they operate straight away."

The Montreal summit, the first gathering of 20 donor nations, agreed to hold a major conference on Haiti's future at the United Nations in March.

Some analysts see Haiti's rehabilitation as a potential opportunity for the US and Cuba to bypass their ideological differences and combine their resources - the US has the logistics while Cuba has the human resources - to help Haiti.

Feinsilver is convinced that "Cuba should be given a seat at the table with all other nations and multilateral organisations and agencies in any and all meetings to discuss, plan and coordinate aid efforts for Haiti's reconstruction".

"This would be in recognition of Cuba's long-standing policy and practise of medical diplomacy, as well as its general development aid to Haiti," she says.

But, will Haiti offer the US administration, which has Cuba on its list of nations that allegedly "support terrorism", a "new dawn" in its relations with Cuba?

In late January, Hillary Clinton, the US secretary of state, thanked Cuba for its efforts in Haiti and welcomed further assistance and co-operation.

In Haiti's grand reconstruction plan, Feinsilver argues, "there can be no imposition of systems from any country, agency or institution. The Haitian people themselves, through what remains of their government and NGOs, must provide the policy direction, and Cuba has been and should continue to be a key player in the health sector in Haiti".
Posted by Paul B at 3:29 PM