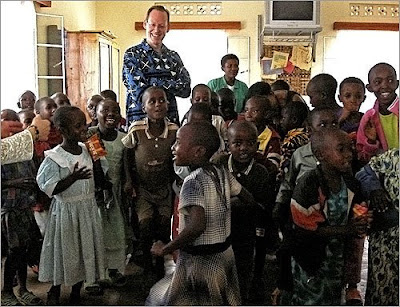 "Game-Changing Pick" Under Consideration to Head New Foreign Assistance Effort
by Jodi Jacobson, Huffington Post
Dr. Paul Farmer, a founder of Partners in Health, recipient of the MacArthur "genius" award and a long-time provider of and advocate for basic health care for the poor is under consideration by the Obama Administration to head a newly overhauled foreign assistance program, according to sources close to Farmer. He will be meeting with Secretary of State Hillary Clinton this week to discuss the post.

Farmer, is a world renowned medical doctor, anthropologist and human rights activist, who began his career in the 1980s by bringing basic health care to the poor in Haiti, a country in which he has continued to work for over 20 years. His focus on human rights as an organizing principal for access to health services sets him apart from mainstream development policy and practice. This is in no small part because he often challenges the basic premise of "trickle down" theories inherent in the delivery of much of traditional development assistance, which often uses the rhetoric of human rights without adhering to the principles of a human rights approach to development. "If access to health care is considered a human right," asks Farmer, "who is considered human enough to have that right?"

"Paul has a vision that is grounded what he has learned in Haiti and elsewhere throughout a 20-year development career," said a source close to Farmer speaking on condition of anonymity.

"He has a vision of how to benefit the poor, starting from a principle of truly community-based and sustainable efforts that involve the population and work in collaboration with the local government to achieve real outcomes."

"If this vision could be spread to even part of US foreign assistance, " continued the source, "it would save a lot more lives, and dramatically improve health and improve economic conditions."

Sources close to Farmer also confirm he is in discussion to lead a wholly revised U.S. international assistance strategy, with portfolio over all non-military U.S. foreign assistance, including but not limited to the programs funded by USAID, the President's Emergency Plan for AIDS Relief (PEPFAR), the Millennium Challenge Account, humanitarian assistance, emergency assistance and potentially food aid. This would be a wholly new position with far broader purview than the current USAID Administrator's portfolio. Such a reorganization would also be in keeping with calls by many advocates who have long criticized the lack of integration within and across health and development programs funded through USAID and other agencies, including the State Department.

Kaiser Network and the Boston Globe reported earlier this week that Farmer had not decided whether he would take the positions, but sources close to Farmer contacted for this article suggested that this weekend he in fact expressed eagerness to take the post if it entails reorganizing U.S. foreign assistance, and if he has widespread grassroots support from the global health community.

And in fact, many health advocates are ecstatic at the prospect of Farmer taking on this role. "This is a precious opportunity for all those who care about the health and well-being of people around the world," said Gregg Gonsalves, an international AIDS advocate and co-founder of the International Treatment Preparedness Coalition (a coalition including thousands of advocates and researchers in over 135 countries).

"What better chance to change things for the better than to have Paul at the helm? He is a pioneer in health and human rights."

William Smith, Vice President for Public Policy at the Sexuality Information and Education Council of the United States, agrees: "He would be an excellent choice with a strong background in the rights-based area where the U.S. has lost significant ground over the past 8 years."

People who have worked with Farmer underscore that he is also an advocate for sexual and reproductive health and rights. According the one source contacted who asked not to be named,

"The first programs [Paul] started in Haiti focused on women's health. He is a strong believer in women's access to primary sexual and reproductive health services. And while Partners in Health always worked within the law of a given country, and did not provide safe abortions where these were legal, Paul saw and treated botched abortions all the time."

Gonsalves and others have high hopes for Farmer's ability to work across silo-ed programs to ensure that health services are themselves integrated and meet the needs of the poor, while also ensuring collaboration and integration across other portfolios to expand access to safe water, increase food security, and meet other fundamental human needs. While U.S. assistance has long funded programs in these areas, they remain largely uncoordinated and often unconnected, making it difficult to achieve sustainable gains in any given area. Gonsalves and other AIDS advocates contacted for this story underscored that having Farmer overseeing development programs would go a long way toward the recent disappointment caused by less-than-hoped-for-levels of funding for global health programs in the President's 2010 budget.

"Putting Paul in charge is change of the kind we all hoped for," said Gonsalves.

"He represents a new kind of vision for global health, because he is not an insider, not a bureaucrat, not just interested in making incremental changes. He wants to reform the way we fund and measure overseas development going forward. He also understands that AIDS has been a catalyst for change in global health and he realizes that there are positive ways to build on this change."

"If Obama is real about wanting to change the way overseas foreign development is conducted," said Gonsalves, "he will have a willing partner in Farmer."

"Nothing in DC is ever done until it is done," he continued. "But all I can say is that this would be a game-changing appointment, an unprecedented one in my lifetime, and yes, change we can truly believe in this time."

State Department representatives and others in the community could not be reached in time for this posting, but RH Reality Check will continue to update this story as it develops and provide reaction from other sources.
Posted by Paul B at 11:32 AM