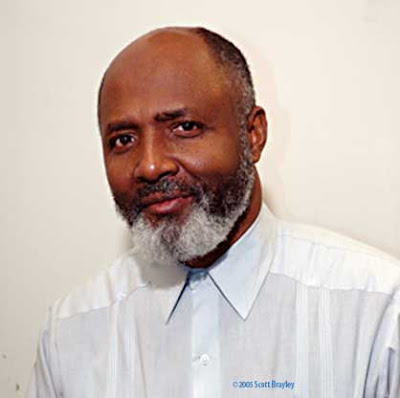 A moving tribute to a our dear friend Father Gerry... a beautiful human being and an inspiration to all those who seek peace with justice.

In Loving Memory,
Paul B

Father Jean Juste – Father of the Just
by Professor Bell Angelot
translated into English by Ezili Danto, May 27, 2009

A powerful spirit has left this earth, and our mourning darkens the whole city.
A griot left for eternity and the whole tribe is in tears. But though the
prophet is gone, his light remains. The Haitian community of Miami has just
rung the toll to announce in pain, and in a flood of tears the departure from
this planet of Reverend Father Gérard Jean-Juste. Father Jean-Juste was one of
the pioneers of Liberation Theology alongside Jean Bertrand Aristide of Haiti,
Leonardo Boff of Nicaragua and Oscar Romero of Salvador.

One can well compare the struggle of Father Jean Juste to that of the biblical
Moses who delivered his people from the persecution of slavery. ("Let my people
go!" Moses said to the Pharaoh of his time). This cry of Moses came often of
the lips of Father Jean Juste, the Prophet from Petite Place Cazeau, Haiti:
“I have certainly seen the affliction of my people, I have heard their cry by
reason of their taskmasters; for I know their sorrows.” (Exodus 3:7).

Father Jean Juste was a martyr. While distributing food to hungry children, he
was arrested and tortured by the political dictators in 2005. Some months
later, even in the deepest bowels of a church, The Sacred Heart Church of
Turgeau, the very same church where Izmery was assassinated, drape in his
priest cassock, Father Jean Juste was brutally beaten almost to
unconsciousness, manhandled and humiliated, afterwards waking up in prison.

Like Jeremiah the prophet, he knew the inside of a prison. Like Martin Luther
King, Jr. he preached love. Like Mahatma Gandhi he lived non-violence and
overcame violence. Just as Moses never reached the Promised Land, he too, did
not see the day of the complete liberation of the Haitian people. The passing
of Father Jean Juste bring us tears, this is a painful severance for us. Of
course, the lost of Father Jean Juste brings us grief, but we believe that
Father Jean Juste lives on.

Again in the years to come, we shall hear, all across Little Haiti in Miami,
the echo of his voice denouncing discriminatory immigration laws. Through time, his voice shall still wholly resound on Haiti, saying no to violence, no to exile, no to arbitrary arrests, indefinite detentions, no to Coup D’etats. Jean Juste lives on and it is now that his butchers will tremble. For without confessing their wrongs and without altering their ways they allowed their victim to die, a man whose heart was filled only with compassion and tolerance.

Father Jean Juste left us on an assignment to meet up with Dr. Martin Luther
King, Jr. to whom he shall say that love amongst the races and race equality is
still a dream; to meet up with John Fitzgerald Kennedy to whom he will say that
Democracy and Peace are still the big challenges of our peoples; to meet up
with Father Jean Marie Vincent, to whom he shall say that the movement to bring literacy to our people has fallen by the waste side; to meet up with (Haiti’s founding father) Jean Jacques Dessalines to tell him that our country has been sold, it’s been torn apart, its been bloodied - peyi a vann, peyi a fann, peyi a tonbe nan sann - and we’ve been divided. He is not dead... He lives on!

His body succumbed to the vicissitudes: to pains that even defied science, to evil his heart and his brain could no longer bring order to, to political shocks that his conviction and his morale could no longer endure.

In the name of the larger Lavalas Movement, we bid farewell to Father Gerard
Jean Juste and wish him a good journey. In the name of all the cadres, the
grassroots/popular organizations, in the name of the Lavalas vision of
inclusion, we say thank you Father Jean Juste. Thank you very much
brother/compatriot, we shall continue to be the Sentinels – (to watch out -
veye yo - look out for the enemy).

The Haitian Center of Research and Social Science Investigations, bows in great
reverence, before the remains of the greatest tree (Mapou) to be cut down in
the forest of the just. May your demonstrations of faith, lessons in courage,
messages of patriotism, forever be the oil that lights our lamps to bring the
light in the darkness of realms, serve us all as the chorus of hope, songs of
resistances, hymn of love and friendship. For, as the (Haitian author, Jacques)
Roumain said in his book, Governors of the Dew - "The fruit that rots nourishes
the hope of the new tree."

Haitian priest Father Gerard Jean-Juste, a symbol of strength, courage and leadership to a great many, was to be laid to rest by his family, friends and supporters on June 18. Few expected the solemn occasion would be transformed into confusion and terror as U.N. forces opened fire towards Haiti’s national cathedral following the arrest of one of the mourners. A victim of a single gunshot wound to the head would be discovered moments later. Witnesses say his body writhed and convulsed struggling with the inevitable as blood slowly formed a crimson background around his head.

Jean-Juste would probably not be surprised by the shooting given that he was a leader of Lavalas and this was after all a Lavalas funeral. He would most likely recall many other instances of human rights abuses committed against Lavalas where the U.N. was complicit or directly involved. He would often criticize the U.N. mission in Haiti for killing unarmed civilians in Cite Soleil and for training the Haitian police as they regularly shot up peaceful demonstrations, performed summary executions and falsely arrested Lavalas supporters following the ouster of Aristide in Feb. 2004. Jean-Juste more than most, would understand that this incident is but one more in a long list of violent offenses committed against the movement of the majority of the poor in Haiti as part of the U.N.’s current experiment in political landscaping.