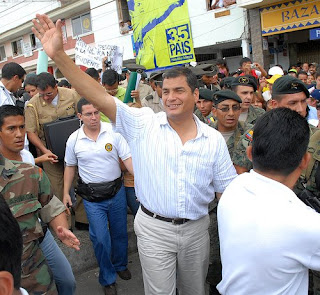 Correa Triumphs in Ecuador, and Thereby Becomes One of Latin America’s Most Successful Political Figures

Ecuadorian President, Rafael Correa, was re-elected yesterday with an impressive 51.7 percent of the vote, in a large field, to serve another term as head of state. Illustrating his widespread popularity in the country, his untainted presidential victory comes as the first such electoral triumph since 1979 that did not require a later run-off vote. His closest contender, Lucio Gutiérrez, managed to command only 28.4 percent of the ballot. Finishing in third with the lowest level of support in his four bids for the presidency, banana magnate, Álvaro Noboa saw his right-leaning electorate seriously dwindle.

It could be argued that Correa is one of the most successful contemporary Latin American political leaders of the era. Since taking office, he has come forth with a very specific socio-political program which has significantly alleviated the country’s political instability and hobbling strategic and economic conditions, while at the same time advancing his overt leftist platform aimed at job creation and lifting the country’s living standards. “Socialism, of course, will continue. The Ecuadorian people voted for that,” he exclaimed after his victory Sunday. “When have we concealed our ideological orientation? We are going to emphasize this fight for social justice…”

Despite having expelled a pair of U.S. diplomats stationed in Quito this year on allegations of their “unacceptable meddling” in Ecuadorian matters, Correa has generally avoided going out of his way to flail at the U.S. At the same time he did not fawn over seeking Washington’s goodwill when he announced that the U.S. lease on the military and anti-drug base at Manta would not be renewed in November. The same cannot be said of his left-leaning counterparts, Hugo Chávez of Venezuela, and Evo Morales of Bolivia, who never avoided exchanging pot shots with the Bush White House, but seem more interested in re-establishing a diplomatic relationship with Washington now that a new incumbent is occupying the White House.

Having been largely effective at maintaining relatively good relations with Washington while still holding his own, Correa appears keen on continuing his social and economic programs. Although he does expend a good deal of time on political dickering and forming non-productive alliances, he is not anything like a regional visionary in the mold of Chávez or Morales. Correa’s pragmatic, hands-on nature and his genuine preference for domestic matters over foreign affairs, and being his own man rather than fabricating a satellite personality is a decided asset. Correa’s feisty performance has improved the myth or reality that the Ecuadorian poor believe that their president has drastically improved the lives of everyday Ecuadorians, including themselves.