El Salvador Is Poised to Break with the Past 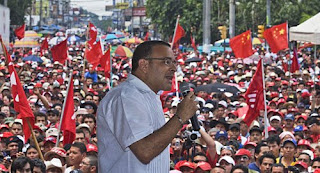 El Salvador is Poised to Break With the Past; Is the U.S. Ready to Change its Policy Toward Latin America?
By Mark Engler, Foreign Policy in Focus. Posted on AlterNet.org, March 13, 2009.
Washington's past policies in El Salvador have been deadly. With Salvadorians poised to vote for change, the U.S. should embrace it.

Mark Engler, a writer based in New York City, is a senior analyst with Foreign Policy In Focus and author of How to Rule the World: The Coming Battle Over the Global Economy (Nation Books, 2008). He can be reached via DemocracyUprising.com.
Posted by Paul B at 10:31 PM