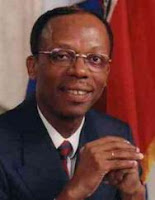 The Bahama Journal
December 29th, 2008
Four years ago, the United States of America found itself at loggerheads with The Bahamas, Jamaica and other members of the Caribbean Community, this as a consequence of certain ominous developments in Haiti.
Highest on that list would have been the destabilization of the Haitian government as it was then being led by its democratically elected leader, Jean-Bertrand Aristide.
Another consequence would have been this leader’s removal from power and subsequent flight to the Central African Republic – and thereafter his exile in South Africa.
But even more egregious is the revelation that Caricom stood revealed as being totally impotent in the face of force majeure on the part of the United States of America.
As we recall from that time, "Caribbean leaders ended a two-day emergency meeting in Jamaica on Wednesday calling for an independent investigation into the circumstances that led to the removal of former Haitian president Jean-Bertrand Aristide from office and into exile.
Jamaican Prime Minister PJ Patterson, who is also chairman of the 15-member Caribbean Community (CARICOM), stopped short of indicating the leaders wanted to suspend or expel Haiti from the Organization, although he did say they were not prepared to "deliberate in any of our meetings with thugs and anarchists".
Of some continuing moment to us is the reported fact that, "On his arrival in the Central African Republic, Aristide telephoned a number of Caribbean leaders, including Patterson, to say he had been forced out at gunpoint by U.S. soldiers and had no idea where he was being taken."
This was surely a very sad time for both Democracy and Sovereignty in the Caribbean. It was a time when there was no space for even a fig-leaf to shield this region’s collective impotence.
Mercifully, things do not remain the same forever.
So it today happens to be that within a matter of days, the presidency that has been George W. Bush’s would have come to an end. This development will bring with it some measure of relief for any number of people in our region.
Clearly, hopes are especially high in Cuba and in Haiti. Two countries whose people have suffered and endured much at the hands of fate and policy in Washington.
In the Cuban case, there is the continuing hope that the United States will ease up on people to people contact between itself and Cuba.
As regards Haiti, the hope concerns Jean-Bertrand Aristide – a man who is arguably the face of Haiti to the world.
In a sense, Aristide is to Haiti as Lynden O. Pindling is to The Bahamas. In another sense, Aristide is [clearly] to Haiti what Barack Obama is to today’s United States of America.
Some of this spirit clearly pervaded some recent demonstrations, in the capital, Port-au-Prince, and the country's second largest city, Cap-Haitien, as Haitians marched and demonstrated on the 18th anniversary of Mr. Aristide's first election as president.
These people gave the lie to the oft stated notion that, "Aristide is from the past. We're looking to the future…" as these words came from the lips of State Department spokesman Adam Ereli.
That was then.
Today our dealings are with the demands that are rooted in this time, this place and in today’s realities.
As we deal with matters contemporaneous, new information coming in from Haiti suggests that the time may be nigh for former president of the Republic of Haiti, Jean-Bertrand Aristide to return to the land of his birth.
There is also a sense which suggests that talk concerning his return from exile in South Africa is itself directly related to the election of The Democratic Party in the United States and to the ascendancy of Barack Obama.
Today we take note of news that, "Hundreds of demonstrators have marched through two of Haiti's main cities, demanding the return of exiled former president Jean-Bertrand Aristide.
They went on to exclaim that, "We want our leader to come back to his country. He's the only one who cares about our situation."
Tellingly, "They urged President Rene Preval to keep his promise, made during his election campaign in 2006, to allow Mr. Aristide to return to Haiti."
Now that the time of exile has come and has seemingly almost gone, we are reminded of that time some four years ago when Haiti’s democratically elected president was ignominiously and we dare say imperiously forced to flee an armed revolt in 2004; thence and thereafter warmly accepted as a most welcomed stranger in South Africa. This thanks to Thabo Mbeki, the African National Congress and presumably Nelson Mandela.
As we thought then, so we repeat our view that this was nothing more and nothing less than a species of arrogance run amok.
Aristide can and should return to Haiti whenever he wishes.
After all, that country is the only one that identifies him as its native son.
Posted by Paul B at 12:43 PM No comments: