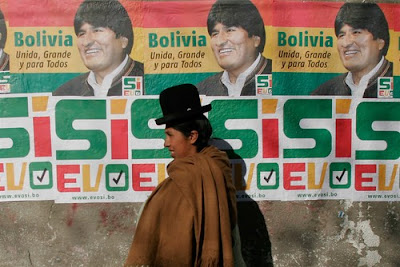 Posters in the capital urge voters to support President Evo Morales in a recall referendum, which also involves the vice president and eight governors.
Unofficial results show the president will retain his post after recall referendum. Two opposition governors are ousted, results indicate.
By Patrick J. McDonnell, Los Angeles Times Staff Writer August 11, 2008
LA PAZ, BOLIVIA -- President Evo Morales appeared to have won a sweeping victory Sunday in a nationwide recall election that the leftist chief of state crafted as a means of consolidating support against fierce conservative opposition.Partial unofficial results based on quick counts at polling places indicated that between 56% and 63% of voters cast ballots in favor of Morales and Vice President Alvaro Garcia Linera, according to local television stations.

Those totals easily exceeded the 46.3% that the president needed to stay in office. The reported vote also surpassed the 53.7% that the president garnered when elected in December 2005.
Supporters had plastered graffiti throughout the capital seeking a pro-Morales vote of 60%, a decisive margin that would give new impetus for the president's controversial socialist agenda of nationalizations, land redistribution and a new constitution.
Late Sunday, Morales claimed victory in front of ecstatic crowds in the Plaza Murillo in downtown La Paz.
"Today, Bolivia fights for its dignity," declared Morales, who also called for reconciliation with his opponents.
Morales, Bolivia's first Indian president, is slightly more than halfway through his five-year term. Voting trends Sunday confirmed his unwavering appeal among the western highland Indian masses who have long been the base of his support.
The opposition has bitterly accused Morales of favoring the highland multitudes at the expense of the middle class.
Preliminary results also indicated that two opposition prefects, or governors -- Manfred Reyes Villa in the central state of Cochabamba and Jose Luis Paredes in La Paz -- were ousted. Their defeats would add to Morales' apparent triumph. Under Bolivian law, once the results are officially ratified the president will name interim governors to replace those voted out.
However, a defiant Reyes Villa told a news conference in Cochabamba that he had no intention of stepping down, and he labeled Sunday's vote illegal and fraudulent.
"I continue to be the prefect of Cochabamba," he declared.
The governor alleged illegal padding of the voting rolls in Cochabamba. The state is home to the rural coca-growing zone known as the Chapare, where Morales leaped to national prominence as head of the union representing cultivators of the coca leaf, the raw ingredient in cocaine.
"I would not be celebrating if I were him," Reyes Villa said of the president. "The country continues to fracture."
The apparently ousted governor vowed a legal challenge. Such a move and the prospect of the forced removal of Reyes Villa could heighten tensions.
Paredes of La Paz took a more conciliatory approach: He conceded defeat on Bolivian television, saying he would work to ensure a smooth transition to a new administration. But he also voiced concern about deep cleavages in this nation of 9.2 million.
"I am worried about the unity of the country," said Paredes, whose popularity had been battered by corruption allegations. "I see the country full of confrontations. I hope we find a way to be together."
One other governor, Alberto Aguilar in Oruro state, a Morales ally, was also voted out, preliminary results showed.
The apparent landslide was a major boost for Morales as he confronts stiff resistance from huge swaths of the country, especially four lowland states that hold much of the nation's gas and agricultural wealth.
All four have voted for autonomy in recent months in a process that Morales labeled an illegal effort to split from Bolivia. All seek a greater share of taxes and gas and petroleum royalties now collected by the federal government.
According to the early results, voters in at least three of the lowland states -- Santa Cruz, Beni and Tarija -- appeared to cast ballots to oust Morales. There were conflicting reports about the fourth, Pando.
The four all voted to maintain their governors, all political foes of the president.
Official results are not expected for a week.
Earlier, Morales voted in his home district in the Chapare region. "My dream is that there is a great unity of the Bolivian people," the president told reporters after casting his ballot. "We have seen a sentiment of the Bolivian people favoring democracy and in favor of making this process of change ever more profound."
patrick.mcdonnell @latimes.com
Posted by Paul B at 2:06 AM