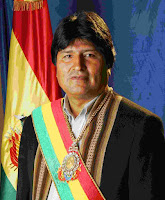 Published on Friday, August 8, 2008 by CommonDreams.org
by Medea Benjamin

La Paz, Bolivia: On Sunday, August 10, Bolivians will go to the polls to vote on whether or not to recall the president, vice president and the governors of eight of the nation’s nine departments. Just 2½ years into the term of President Evo Morales, his government is racked by political crises. This week alone, two miners participating in a protest for higher pensions were killed in clashes with police; a meeting in the Bolivian town of Tarija between the presidents of Venezuela, Argentina and Bolivia was cancelled when protesters tried to storm the airport; and President Morales will not attend the traditional independence celebration in Sucre on Wednesday, August 6 for fear of anti-government violence.

While the president and vice-president are expected to survive the recall, perhaps even overturning a few opposition governors (seven out of nine governors are in the opposition), the tensions tearing at this divided nation’s social fabric will persist.

On one side of this struggle is the impoverished indigenous majority in the western highlands who, along with Bolivia’s first indigenous president Evo Morales, are trying to redistribute power and wealth towards poor communities. Pitted against them is a mostly white elite based in the eastern part of the country who want to keep tight control over the nation’s wealth and are using their money and control of the media to foment widespread discontent. Sadly, the U.S. government, instead of embracing social transformation in Latin America’s poorest nation, is aiding and abetting the opposition.

At the opening meeting of a group called International Intellectuals and Artists for the Unity and Sovereignty of Bolivia on July 26, Bolivian President Evo Morales put the division in simple terms. “Two models of government are on the table,” he said. “One is a colonial model where a few families control the nation’s resources. The other, which we defend, is based on the nationalization of natural resources for the benefit of everyone.”

Morales’ government nationalized the nation’s most important source of revenue, natural gas and has used the profits for social programs that fight poverty and inequality. These include free school meals and a cash payment to mothers who keep their children in school. Morales has also raised the minimum wage and expanded the number of eligible elderly people receiving pensions from 489,000 to 676,000, providing them with the equivalent of 27 dollars a month. [Nearly 60 percent of elderly people in Bolivia live on less than one dollar a day.] He is also trying to institute a land reform that would take non-productive agricultural land from wealthy landowners and give it to poor, landless families.

Morales has appealed to progressive governments in the region to help with his program of social transformation. Cuba has sent thousands of doctors and teachers to rural areas and is building dozens of hospitals. Venezuelan President Hugo Chavez and Brazilian President Lula da Silva are investing in the expansion of Bolivia’s gas industry and helping to construct new highways.
Turn on the radio or the television these days, however, and you’ll hear a different story. A barrage of opposition ads encourage people to vote against the President in the upcoming recall. They scare people into thinking that Morales is going to take away their private property, like their homes or their cars, and paint him as a “Chavez-style dictator” who has indebted the country to Venezuela.

“I apologize to the journalists here,” Morales said at the scholars’ meeting, “but in Bolivia the press is engaged in media terrorism. I know it’s not you, the journalists, but the owners of the means of communication. They manipulate the news and the polls; they lie to the public.”
He gave a recent example. He had just come from visiting Camiri, a town in the department of Santa Cruz, which is the home of the opposition. A large group of people came out to welcome him and listen to his speech. At the end of the rally he heard some firecrackers and was told that there were a handful of protesters. On his way back to the airport, however, he heard a local radio station say that the people of Camiri had blocked him from coming to the city. “I had to laugh,” said Morales, “because there were perhaps 20 young protesters compared to crowds of supporters. But that’s how they reported ‘the news.’”

The recall vote comes on the heels of a series of referendums organized by these powerful elites in the eastern departments calling for autonomy from the national government. They have been able to mobilize significant sectors of the population, including people who once supported Morales but have been disillusioned by what they perceive as government corruption and incompetence.

While the autonomy referendums passed, they were claimed illegal not only by the President, but by the Bolivian Electoral Court, the Organization of American States, the European Union or other major leaders throughout the region.

The next vote is the Aug. 10 recall vote. If Morales and Vice President Alvaro Garcia lose, they have to hold new elections within 90-120 days. If any of the governors lose, Morales gets to select interim governors until the next election.

Polls indicate that the president and vice president will win, thanks in part the government’s massive voter registration drive and the fact that many voters who are critical of Morales will back him so as not to strengthen the right-wing opposition.

A win at the polls is crucial, but it is not likely to stop the growing tensions that have polarized the country, created a crisis between national and local legal institutions, dried up private investment and led to increasingly violent clashes between supporters on both sides.
The following are some of the crises the government will still have to contend with:

* If several opposition governors lose, they and their supporters may refuse to accept the results, which could lead to increased violence and make certain departments ungovernable;

* A new constitution that aims to include Bolivia’s historically excluded indigenous majority within a “plurinational” state, with greater state control over natural resources, was passed in December 2007 by an assembly that was boycotted by opposition parties. It still awaits approval in a national referendum that is being blocked by the opposition-controlled Senate.

* Even the location of the nation’s capital is in dispute. Sucre, which is in the hands of the opposition, is the historic capital of Bolivia, but all the state powers were shifted to La Paz in the wake of the 1899 Federal War between conservatives in the south and liberals around La Paz.
Opposition leaders, however, have been complaining about “La Paz centralism” and whipping up local sentiment for Sucre to become the capital. This has led to violent clashes that will likely continue.

* Tensions with the U.S. government have been rising, as more information comes out regarding U.S. support for the opposition. The Morales administration has accused the US Agency for International Development (AID) of working to undermine it. Vice President Alvaro Garcia said the U.S. was trying to develop “ideological and political resistance.” In June the Bush administration recalled its ambassador to Bolivia for several weeks following massive protests outside the US embassy, which the U.S. accused Morales of inciting. As Bolivia continues to strengthen its ties with leftist governments in the region and reject free market economic policies, it will face increasing opposition from the U.S. government.

Back at the gathering of Intellectuals and Artists, Frei Betto, a well-loved liberation theologist from Brazil, spoke on behalf of the group when he told Morales, “We’ve come from all over the continent to show our support because the future of Bolivia affects the future of all of Latin America. We’re inspired by your efforts at social transformation and we hope that the August 10 vote takes place in an atmosphere of peace, tolerance and respect for the sovereign will of the Bolivian people.”

Medea Benjamin is cofounder of CODEPINK and Global Exchange.
Posted by Paul B at 12:16 PM