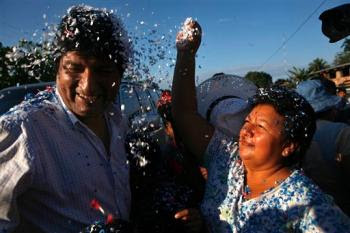 I am always amazed at how people who don’t actually live in Bolivia produce such rapid and certain analyses of events here and what they mean. Official election results for Sunday haven’t even been announced yet by the Corte Electoral and already the Web is full of articles declaring with great confidence what the Evo vote meant and why.

In many cases these analyses are based on a simple formula:

Sometimes the ideology involved is right wing: Evo’s victory is a dangerous win for Chavez-style social manipulation of the ignorant.

Sometimes the ideology is left wing: Evo’s victory signals the continuation of the hunger of Latin America’s poor for genuine socialism.

Do certain people abroad really believe that Bolivia is inhabited by women with long braids carrying Noam Chomsky under their arm?

After ten years here I have come to one relatively certain conclusion. Bolivians are like most people everywhere. When they think about politics they don’t really come at it ideologically. They come at it very practically. Their chief consideration is: what do they think will make their lives better, especially given how tough life can be here for so many.

Bechtel didn’t get kicked out because people wanted to fight corporate power (though the leaders of the Water Revolt did). It is because the Bozos running the corporation thought that they could raise water rates by more than 50% overnight and get away with it. In economics the technical term for this is called stupidity.

So, based on a different ideology, one called “Bolivians are smart and know how to look out for their interests,” here is my own analysis of Sunday’s vote – and it ain’t rocket science.

First, the “Age of Evo” was inevitable in Bolivia.

Most Bolivians live so close to the economic cliff that they worry day-to-day just about the basics – feeding their families, keeping a roof overhead, affording the 1.50 Bs. fare for the bus. Their obvious “class interest” is not ideological; it is in people’s faces hour by hour. There are certainly many people in Bolivia who do not need to worry about such things but they are not the majority, or even close to it.

For years the real political question in Bolivia was: Why hasn’t some politician or political party come along and figured out how to represent that majority and win its electoral support? Sooner or later it was inevitable that one would, and one did, Evo. It could have been someone else besides Evo and MAS, but it was Evo and MAS that set out to do so, while other left leaders focused on other things. And none of the others who tried the election route, like Felipe Quispe, had anywhere near the long-term commitment or savvy to pull it off. Evo and MAS did make it their work and they were aided greatly by the incompetence and ruthlessness by some of those who preceded Evo in the Presidency, adding to Evo’s base of support.
I know lots of people who went to the polls Sunday and voted for Evo and their reasoning is pretty simple. In Evo they see a President on their side and in the opposition they see a lot of leaders who look and sound and just like those who have ignored them. Every time Ruben Costas (the Governor) rants in Santa Cruz it only makes Evo stronger. Any hesitations they might have about competence or combativeness by Evo are really much less on their minds than the simple fact that in Evo they see themselves. And that is something very, very new for them in Bolivian politics.

Second, Evo’s Adversaries on the right are louder than their numbers.

The numbers from Sunday speak for themselves. Two thirds of Bolivians want Evo to be President, a third does not. You don’t get more lopsided than that in politics.

Look at it by region. According to the latest results, Evo will win majorities in seven of Bolivia’s nine departments, and majorities of greater than two-thirds in four of them, including two of the largest, La Paz and Cochabamba.

Where is the opposition? Well, it isn’t an overwhelming force in Chuquisaca the way those Sucre leaders would like to portray things. Evo is winning 54% in the department where “capatilia” is king. Opponents can certainly claim Beni, where 58% of those who went to Sunday’s polls voted to oust Morales. But with 100,000 voters out of 8 million Bolivians that puts it in a league roughly akin to Quillacollo, a smallish city down the road here where Evo won handily.

And then there is Santa Cruz, the only region of any size in Bolivia where Evo lost, 60/40. The real result of Sunday’s vote maybe the political isolation of Bolivia’s most vocal department and in particular its vocal leadership. Before Sunday one could speak of the Media Luna, a coalition of anti-Evo departments with Manfred Reyes Villa trying hard to add Cochabamba and make it five. After Sunday what you have is Ruben Costas and the usual gang of Santa Cruz civic leaders screaming for coups and autonomy and tossing out racial insults while they watch the rest of the country slip away.

How is it that the position of Evo’s hardcore opponents got so inflated?

Across Bolivia, the people who you see on the television each night (I do sneak a peak on other people’s TVs from time to time) or who you read about in the press, are not people like my rural neighbors who voted across Bolivia in droves for Evo. Who you see and hear from is a small minority of Bolivians who make an effort daily to be in the news.

As it turns out, the faces you see in the news sections of the paper are no more representative of Bolivia than all those smiling faces at the quincineras of the wealthy that you see on the society pages.

There is the bluster factor. The old Bolivian right wing, which it seems is really going extinct by way of the dinosaur, is making a lot of noise as it goes, imitating with hunger strikes and road blockades the attention-grabbing tactics long used by the left. There is no question, as I have written before, that civic leaders in Santa Cruz and Sucre have been able to turn their agenda into an appeal to regional interest with good success. But those pockets are getting smaller and more isolated, which may explains why Costas’ rhetoric is getting more extreme. Evo picked up seven points in Santa Cruz over his vote there in 2005.

Third, Can Evo Use the Moment?

Morales was skillful Sunday night, going back to looking and acting Presidential and leaving it to his adversaries to act like school bullies looking for a fight. When the votes are analyzed I think it will become clear that his support in the cities and among the middle class remains as weak as his support among the rural and the impoverished is strong. But he needs the cities and the middle class to govern. Acting Presidential is a good start.

But then he has a choice to make. Will he lead with initiatives that aim directly at people’s daily lives – like his programs offering payments to school children and the elderly? Or will he use his renewed political capital to push the agenda aimed more at making the shift in political power more permanent, by pushing forward with a vote on MAS’ proposed constitution?

While this current “Age of Evo” was inevitable (even if led by someone else) it is not forged in stone. There is one political force in Bolivia far more powerful than indigenous identity, class interest, or even regional interest. And that is public dissatisfaction. If people see in Evo a government that is incapable of lifting up their lives (even if they think he is trying) someone else will come along and capture that wind.

Morales and MAS have proven themselves very adept at politics. Very adept. But they have yet to demonstrate a similar adeptness at actually governing. If I were them I’d lend my attention now to that.
Posted by Paul B at 12:16 PM

Sometime few educational blogs become very helpful while getting relevant and new information related to your targeted area. As I found this blog and appreciate the information delivered to my database.Post mortem communication Bolivia